AMSOIL battles volatility in order to meet today’s strict engine oil specifications. To properly protect modern-day engines, engine oils must show enhanced resistance to volatility. In 1985, AMSOIL became the first oil manufacturer in the United States to utilize the Noack Volatility Test (ASTM D5800). It was a measurement of performance superiority. Today, it is an industry standard.

The most used method used in measuring oil volatility is the Noack Volatility Test. But that has not necessarily been the case. Initially developed and used in Europe, the Noack test was not frequently used for lubricants. Not until AMSOIL founder Al Amatuzio initiated its use for the automotive industry engine oils in 1985. Previously, a lubricant’s flash point was the main way to assess an oil’s volatility.

In the Noack test, an oil test is weighed and heated to 250°C (482°F) for one hour. Dry air is passed over the specimen, carrying the oil vapors that have boiled off and placing them in a beaker. The original specimen is removed and re weighed. Any decrease in weight will be reported as a percentage lost of the original weight.

Why is Noack Volatility Important?

Modern engines, especially those which are fitted with performance improving technologies such as direct fuel injection and turbochargers, produce increased heat in the comparison to its predecessors. At higher temperatures, for example during severe service or when you are driving in the hot summer weather, the oil’s lighter-weight molecules can evaporate, or literally “boil off.” The more unstable the lubricant is, the lower the temperature at which the oil will begin to evaporate. The more it evaporates, the fewer oil is left to protect equipment. This makes it faster the user will need to replace the lost oil. You may have been experiencing this phenomenon by owning an automobile that utilizes engine oil in sporadic intervals.

Fluctuations affects more than the rate of petroleum consumption. When light items in oil evaporate from the heat, the oil’s vyscocity rises. This thicker oil forces the engine to work harder, which has resulted in numerous problems, among other things…

When AMSOIL began using this test, it was common for competitors’ conventional oils to demonstrate a volatility loss in the 17-25 percentage range. By contrast, the volatility loss of AMSOIL synthetic motor oil was often less than half that. The Noack Volatility Test presented a new measure of performance to the lubrication industry, while allowing AMSOIL to differentiate the performance of its synthetic motor oils from the competition.

Currently, API SP and ILSAC GF-6 performance classifications require weight lost due to volatility to be no greater than 15 percent. This is for all vyscocity grades of engine oil. General Motors’ proprietary dexos1™ Gen 2 motor oil specification is stricter, which would require no greater than 13 percent weight lost. 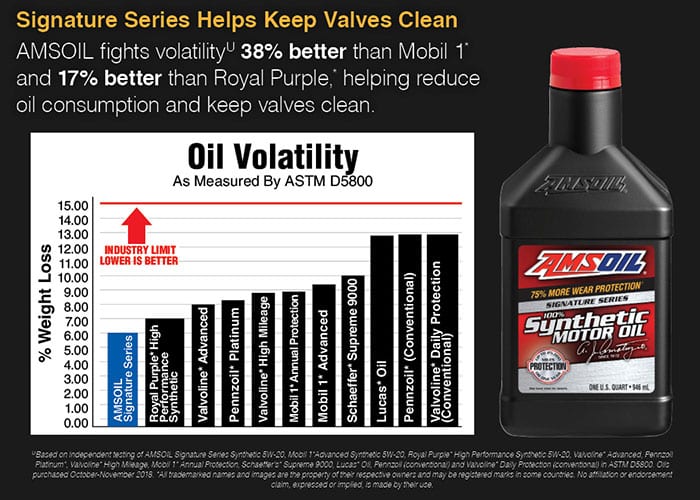 AMSOIL synthetic motor oils are more durable and heat-resistant than other synthetic and conventional oils, as the graph shows. They defy volatility to withstand deposits and oil thickening, increasing fuel economy and engine performance as well as life.